Ils appartiennent au groupe ethnique appelé "Nguni" Les Xhosa ont été les premiers Noirs à  rencontrer les Blancs au XVIIIeme siècle.The Xhosa people are black Africans who are mostly known as cattle herders and live in beehive shaped huts in scattered homesteads ruled by chiefs. They live primarily in the Eastern Cape areas called Ciskei and Transkei. Xhosa are also found all over the Republic of South Africa in various occupations.The Xhosa people today have developed from an early clan of the Nguni people. They are the most southern group of the Bantu migrations from Central Africa into the southern Africa areas. The indigenous people they met on their migrations were the Khoisan (Bushmen and Nama or "Hottentot") peoples. The Xhosa culture (and Nguni culture as a whole) has borrowed from the Khoisan culture and language and the two peoples lived symbotically and even intermarried. The Xhosa people speak a language called "Xhosa" which is known as a "click" language, having three basic clicks, borrowed from the Khoisan languages. The Xhosa were herders and farmers. But today they are involved in a wide range of activities and livelihoods. 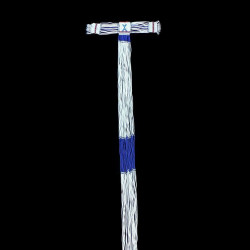